Jackie Ling was born in New York City, grew up in the mid-Hudson Valley region of New York state, and graduated from Cornell University. She has been writing for over ten years. Currently, she is working on a novel. She lives in Los Angeles with her family and dog. Every morning, she drinks hot green tea. 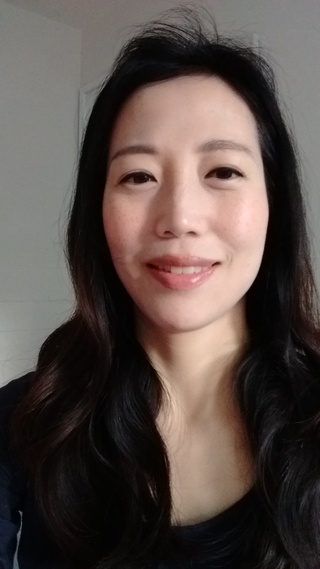 Here are some samples of my work.  I wrote these pieces of flash fiction for a writing class I took a while ago.  If you like them, please continue to read more of my current work  :-)

There once was a red-haired pig-tailed freckled-face girl who tried to erase her freckles.  She glared in the oval shiny mirror on the corner of the wall and hated those darn sepia-colored speckles.  They made her think of tiny bed bugs crawling across her round cheeks from her nose to her ears.  And, she shuddered.

"Mirror, mirror," she chanted, "vanish my freckles!"  And, a tiny wisp of smoke shaped like a miniature hand curled out of the crack between the glass and frame.  It pointed at her left cheek, closed in, and rubbed with its tiny index finger.  But, the spots remained.

She tried a different chant.  "Mirror, mirror, vamoose my freckles!"  And, a medium hand of smoke curled out and rubbed at her right cheek.  This time, the spots got darker.

"Idioto!  Yo mataria tu!" she screamed at the glass.  Then, a giant hand of smoke came out and enveloped her whole head.  It pulled her into the glass and she disappeared, never to be seen again.

In the chilly conference room, she pulled out the rolling office chair at the faux wood long table.  The chair was almost like the one she used in front of her oak writing desk at home.  It was at this desk that she imagined all sorts of adventures, on this world in thick jungles and wide rivers and on made-up worlds in outer space.

For now, she had to take notes at this meeting with her bald boss sitting at the head of the table.  She doodled on her blue-lined legal pad.  The other partners came in with their coffee cups and pens and pads of paper.  She was the only female partner, a token, she thought, to avoid lawsuits.

This lousy seat with this group of stiffs is what she had worked ten years for.  When she had started out, she thought her work days would be straight out of the dramatic television show, "The Practice."  Instead, they were mostly boring meetings in overly air-conditioned conference rooms with overworked suits.  On the right lower corner of her pad, the drew a picture of a dragon with big sharp teeth.

A male legal assistant opened a laptop and set up some Powerpoint slides.  She kept drawing as the presentation began.  As her boss reviewed the latest numbers, she flipped the pages at the corner of her pad with her thumb.  The dragon blew fire and flapped its webbed wings.

Master Tanner had sold her husband to the Landon Plantation in Georgia.  She found out after coming back from the fields for lunch.  Georgia's a mighty long way from Louisiana, she thought.  And, she doubted she'd ever see him again.

As she stood on the porch, she stirred the pale blonde cornmeal gruel in her wooden bowl.  Her oldest child, a skinny girl with cropped black hair, coughed next to her and asked for some water.  "Go get it from your sister," she said.  Her other three children sat in the gritty dirt in front of the porch steps.

Five male slaves joined her on the porch with their wooden bowls.  They smelled like rundown horses and ripened sweat and rich land.  They ate slowly, too tired to speak.  Afterwards, they licked the salty cornmeal from the corners of their mouths.

She watched two female slaves herding two clucking chickens across the yard.  They were taking the chickens to the barn, where the slaughtering of the animals and punishing of the slaves were usually done.  People got to eat, she thought.  She scratched her forearm above an old knotted scar which still felt tight when she reached for things.

She felt thirsty too now.  The life-giving sun dries you out, she thought, until you're like a piece of kindling.  A sliver of dried up timber about to catch on fire and burn down to grey ash and absorb into the fertile soil.

Boot camp training was a walk in the park, we thought.  Captain Machette tried to give us a hard time, but you know, we could handle anything, us nineteen year olds.  It was better than sitting in another classroom with all the namby pansy high school classmates of ours who went to college.  The momma boys and spoilt princesses who dashed off to join the right fraternities and sororities, to learn to eat with the right fork and drink with their pinkies up in the air.

Nope, we were made of tougher stuff than that.  So what if dad had left us?  We were better for it.  We'd show the town what we were made of.  Pretty soon, we were headed off to adventure and glory in some place called Norman in France or somewhere.  Nothing to it, we thought.  Who needed to stay in our little pokey town anyway, with people always judging you.  We were going to show them all.

On our last night, the boys and me, we went wild hootin and hollerin.  We drove at what must have been 95 miles per hour to Flannery's on the outskirts of town, wearing our pressed uniforms to impress the ladies.  It worked, too.  That was the night I met Leanne, with the cutest little sprinkling of freckles high up on her cheeks.  She told me her sister had leukemia and she was going to be a nurse to help her.  At the end of the night, she wouldn't let me go all the way although I sure did try.  But, she promised to write and she did all through the war.

During summer afternoons, we used to ride our dirt bikes on the two trails through the hairy woods past the clearing after the last edge of houses in our development.  It was like entering the magic forest, where we hoped to catch a glimpse of wild boars and grizzly bears and maybe even a white unicorn if we were lucky.  Tim would yell out when he thought he saw something and when the rest of our gang looked over, he would say we just missed it.

It was good to get away from the divorces and money troubles our parents had going on at home.  Nick, Beth, Tim, and I were like our own little family, what we would have had if we had had a choice.  We even wore the same acid-washed jeans rolled up on the bottom and red cotton socks underneath.

I loved to smell the musty air, full of tree sap and mossy dirt.  My nose would tingle as I navigated my way over the bumps between the wide tree trunks.  I would pretend I was a knight in armor riding a black stallion and running the gauntlet to save the village.  Nick and Tim were my fellow knights and Beth was the princess who ran away from home.  When evening darkness fell, we never wanted to go back.

We, the elite fighting force Team Diablo, attacked the aliens at noon because we knew they had better night vision.  We humans really were not given many physical fighting defenses.  Poor eyesight, tender skin, and no claws or fangs.  It's a marvel we've gotten this far on planet Earth.  And don't get the team started on our supposed intellect.  Nearly everyone we know has some neurosis or depression or obsession or ADD or OCD or something from the long list of American Psychiatric Association disorders.  Even with our self-destructive nature, we're still here.  It's a wonder.

For whatever reasons, the aliens landed in Pocatello, Idaho, last Wednesday.  A preacher's wife saw a flash of light and thought she was going through menopause.  But, the aliens had broken through our ozone layer and into our oxygen atmosphere.  They left a trail of white burnt ash falling through the evening sky.  The kids in Casper, Wyoming, thought snow had arrived early and were excited to get off from school.

After our first strike with our drones at noontime, the aliens fought back with a colossal flamethrower.  They missed the barn by about a football field's length.  Now we had a better idea what we were dealing with, the fire and bad aim and everything.  After that though, the aliens incinerated the Lindquist pig farm.  Everyone thinks Idaho's all about potatoes, but they have other types of farms too.  The President ordered a second attack at daybreak.

"That's Captain to you."

"Whatever.  Try taking a chill pill."

Ahab looked at Ishmael and, for a fleeting second, thought maybe he was right.  Maybe all Ahab needed was a warm cup of chamomile tea to make him feel better.  Forget the blubbery whale.

They were so far out to sea, though.  How would he tell the crew to turn back now?  Then again, they did have enough supplies to party cruise back to Nantucket.  It would be like spring break vacation.  They could spend the next two weeks sunning themselves on the wood deck, smelling the salty ocean air, drinking rum from the brown bottles, and playing the ukulele the first mate had brought on board.  He used to be pretty good dancer, too.  He could probably still hop around.

But, he felt a pang in his leg, the ghost pain of his lost limb.  And, he saw crimson red and a hot pressure filled his head.  His young wife would no longer touch him, so how could he go home?  His own child looked at him and his peg leg like he belonged in a freak show.

He searched the worn pockets of his grey canvas pants and pulled out a quarter.  Heads we hunt, tails we party.  And, he flipped the coin in the air, caught it, and slapped it on the back of his hand.  He peeked at the coin.  Heads, bummer.  Holding a grudge was hard work.

Current Novel in the works

A young adult woman faces a journey in a dystopian world.